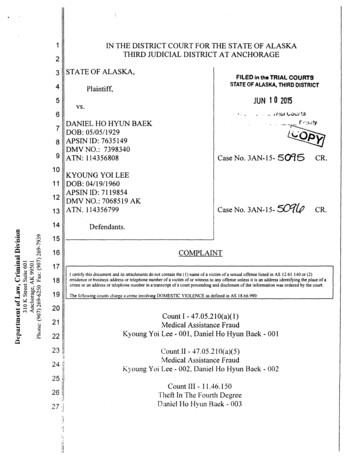 1 (SDS) Investigator James Drayton with SDS, Investigator Theresa Rosso with SDS, Office2 oflnspector General (OIG) Agent Therese Kim Vu and Investigator Richard Mays with the3 Oregon tvlFCU. Your affiant is a criminal investigator with the Alaska tvlFCU since August4 2012. I am assigned to conduct criminal investigations ofhealth care providers enrolled in5 the Alaska Medicaid Program, which is managed by DHSS. Such investigations may6 pertain to property crimes ranging from medical assistance fraud, falsification of business7 records, forgery, theft and schemes to defraud; crimes against persons such as endangering8 the welfare of a vulnerable adult, reckless endangerment, assault and complaints of abuse or9 neglect against patients residing in health care facilities which receive Medicaid funding;10 and complaints of theft or embezzlement of patient's private funds in these facilities. TheM0\. r- . 0\\0N(!#,.00 §\QV)'-'B .""·- ua::.::t.l. -v t: o !:l0.0 N. ::.:: g ! M !'- at 0.:.1 1332 years with Boise Police Department serving the last 27 years in detectives.2.15The MFCU is conducting a joint State and Federal investigation intofraudulent Medicaid billing by Personal Care Attendants (PCA) associated with PCA16 Agency C Care Services. PCAs are enrolled in Medicaid as home based healthcare17 providers. The Alaska Medicaid Program pays PCAs to provide services of daily living to18 Medicaid recipients, which will allow Medicaid recipients to stay in their home ratherQJVV) 1'/.)e\0 the program. Prior to this employment, your affiant was a police officer for approximately0\Q 12I-s--r- .MFCU is also charged, by law, with investigating fraud at any level in the administration of14. 1119than be placed in an assisted living home type setting. Medicaid recipients are evaluated20for medical needs by an employee ofDHSS and the recipient is then authorized to hire a21PCA to provide home based healthcare services. The PCA fills out a timesheet for the22work done and submits it to a PCA agency that in turn bills Medicaid. Medicaid pays23approximately 2- an hour to the agency and the agency must pay the PCA at least half0e c:0.da.253.2627On June 30, 2014, DHSS received information that several Medicaidrecipients living in the same building were receiving Medicaid services that they did not !need anJ invclvcd in a scam to bill Medicaid tor services never rendered.I,I.II Lc mpla1ntv Da:ue! !!,;-"'lit!l· ;·., '. fof'JIIfl;'ll" ·"'"!'rmiei.'Jadc LeeThe informant

1told investigators that Medicaid recipient Baek told the informant that receiving PCA2services was a good way to make extra money and that Baek claimed to receive money3for getting PCA services. The informant also alleged that Baek was healthy and strong4and did not need PCA services. SDS investigators initiated an investigation into recipient5D.B. based upon the information received. Baek resides in a Senior Housing Community6that maintains security videos of all of the entrances and floors.4.7. r- . - --r- Q0'\M0'\SDS investigators reviewed Baek's most recent assessment which was8conducted on November 5, 2013. Baek was observed to move slowly with a cane for9assistance and reported left joint shoulder pain and a poor range of motion. Baek claimed10to need assistance dressing, using the toilet, bathing and hygiene. Based upon his11assessment, Baek was authorized to receive 16.75 hours of weekly assistance with12transferring, dressing, toileting, bathing, light and main meal preparation, shopping,13housework and laundry.5.14On July 14, 2014, Investigators Rosso and Drayton observed Baek walk15independently without assistance, board a bus and make a transfer by reaching his hand16above his head to pull the cord and carry a backpack over his left shoulder all withoutai.O -17assistance. On July 16, 2014, Investigators Keilman-Cruz, Rosso and Drayton observed.18Baek board a bus for the Dimond Center, make a transfer and then walk from the Dimond19Center to Value Village located across the street all without assistance. Video-- ,.-.,::lMt"- 20surveillance shows Baek entering the store and shopping, trying on clothing and pushing8.e;;21a shopping care all without assistance. Investigator Rosso then observed Baek putting a 0. I0'\1.0Ne'S. 0,.-.,0 . 2 "" · ua i 0Q) e'S .b OllN VJ '?. ::.a g OoUN".)""c., -l,.;0 i3:22 ( pair of soccer shoes and several t-shirts into his backpack and then exit the store without!I23 li payingt )r lh .!items.II24!I6.On July 29, 2014, fnvestigators Keilman-Cruz and Kurth interviewed Baek23 j ·or a quality control check with his PCA client manager and translator Frank Woo126 :1 ;:'fe::ent. Back was in his pajamas, seated on the couch with a cane next to him. BaekI27 il.:laimed he cwid only raise his left arm to his shoulder level dueII;, · ',.:qJbintJ! 'o'',lft: ,, JlJnr.!l !In !f;un Jr.d Daniel Boekl; ! : .::- .-!1II5of 1)Leetl'ain and weakness.

1Baek told investigators that he could not go outside of his apartment unassisted without2his PCA and he uses his walker or cane. Baek said he had only left his apartment twice3in the last two weeks. Baek also asked the investigators for an increase in his PCA hours.7.4On August 1, 2014, Investigator Rosso again observed Baek take the bus5from the downtown transit center to the Dimond Center. Rosso observed Baek walk6across the street unassisted from the Dimond Center to Value Village on Dimond7Boulevard. Rosso observed Baek take an electric rice cooker off of the shelf, test the8buttons and then put the cooker into his backpack. Baek then began trying on clothing by9reaching to upper racks to grab items with no observed limitations. Rosso then observed10Baek leave the store without paying for the rice cooker. Baek then walked next door to11the Salvation Army where he tried on a hooded jacket. Baek walked around the store12with the jacket on for about 10 minutes and then left the store without paying for the13 jacket.:a 8.14Medicaid records revealed that Baek was receiving PCA services from Q15' Kyoung Yi Lee. Investigator Drayton secured a copy of the security video with footage16of the hallway outside the door leading to Baek's residence. A review ofthe footage17from June 8, 2014 through July 14,2014 showed Baek coming and going from his18apartment carrying groceries, laundry and garbage without assistance. The video19surveillance also showed that Lee did not visit Baek's residence during the dates20reviewed.9.21A review oftimesheets submitted to Medicaid by Lee for the time period22June 8, 201-l through July 14, 2014 revealed that Baek and Lee both signed the23timcsheets24submittd ti;;lcsh-:ets stipulated that Lee was providing daily services to Back in his25residence to ;nclude bathing, dressing, transfer, meal preparation, toileting, shopping,2627a tcstingthat Lee was providing daily Medicaid services to Baek. TheI meal prepanti·.m and light housework.1/,'i C lllfliJIIltl1 ·;,,;1 t'/\1111c/ flo 'hi ·'""J' m.:l !J,;ek Lee

I 0.12him and he indicated that he thought Lee was on vacation during this time. Baek also3indicated that Frank Woo, came to his residence during the time in question and asked4him to sign timesheets and gave D.B. 200 in cash. A review of the surveillance video5revealed that Frank Woo did in fact come to the residence. A review of Xerox Medicaid6billing data revealed that Lee billed Medicaid a total of 1,799.48 for PCA services she7claimed to provide to Baek from June 8, 2014 through July 14, 2014. Baek was also8confronted with the video evidence of his theft ofthe rice cooker. Baek admitted to9stealing from stores and said "it was only a used store." Baek also admitted to using the10rice cooker.11. Q0\. "')-0\0\.Q r- IIQN '"'"' -- .0 0 .§IQ""''-' g:: · ""ua . 1) dJ. 0dJQogN-;;;; r::--""a c.Qj 11. OIG conducted an audit ofPCA Lee's domestic travel records from 201112through 20 14 which revealed that Lee traveled from Alaska to Portland, Oregon on13February 4, 2013 and returned on February 13, 2013. A review of Medicaid billing14information revealed that Lee billed Medicaid for providing services to four different15 PCAs during the time she was in Oregon. A check of the timesheets revealed that Lee16 and each ofthe four recipients (including Baek) attesting that Lee was providing17 Medicaid services during her trip. In total, Lee billed Medicaid 1,667.3 8 for PCA18 services she claimed to be providing while actually she was in Oregon. n tJ O{)N Cil 'f. ,g QjBaek was interviewed regarding the services Lee alleged to be providing0 ::0.c 0.1912. Lee was interviewed at her place of business on May 27, 2015 in20 Beaverton, Oregon by OIG Agent Vu and MFCU Investigator Mays. Lee initially stated21that she left Alaska in June 2014 for her permanent residence in Oregon. Lee reviewed22copies of the timesheets in question and acknowledged her signature on D.B.'s timesheets23as wcli as r·.:cipient P.C.'s timesheets. Lee stated that the narrative writing on the24i timesheets was done by her son Frank Woo as soon as Lee told him what happened each25day. Lee claimed that she would take the timesheets to Frank Woo's office or he would261coP1e to her home to collect the timesheets.27 IIIIli , .on1p I.ut.t11/,J/c' v. r\uu.:! /In fit un ,u;,i [\.uuel BJc·k L.:cI!II :·.1.:. ;.,f9II

113.In response to being confronted with the video evidence showing that she2was not providing Baek Medicaid services, Lee changed her story and said she was in3Alaska and provided the services. Lee claimed that she would call Baek and meet him4outside the apartment. Lee alleged that they would leave the area, but that she would still5do the work. Similarly, when questioned about the timesheets showing that she dressed,6cooked, toileted and bathed Baek, Lee would only respond that she provided the services.7Medicaid regulations provide that PCA services are to be provided only to a recipient that8is living in the recipient's personal residence. See Alaska Admin. Code97AAC125.050(a).1014. Frank Woo as a client manager for C Care Services was responsible for11acting as an intermediary between Medicaid recipients and PCAs and verifYing that PCA12services are provided. MFCU executed a search warrant on the business premises of C13 Care Services in October 2014. During the search, investigators discovered a document. r.Q.N --r §'OV'l., ,00\. 0\("")-'0,--,. 00 . u ., · - - U 0 &-- ("")a 16 timesheets for dates in July/August 2014, including the dates associated with the July17 dates of service that Lee claimed to be providing PCA services to Baek.1815. Lee billed Medicaid a total of 3,426.05 for services that were never'019 provided. A review of timesheets also revealed that Lee was in fact paid by C Carer 20Services for the PCA hours she alleged to have performed. Alaska law provides that a ;;21person commits medical assistance fraud by knowingly submitting or authorizing the22submission of a claim to a medical assistance agency for a benefit with a reckless("Ic. od,.::'0Oo Nt: c. PCA, date of services and scheduled hours. Lee was identified as having missing l) UV) (/).:l 15I0\ .14 titled "Missing Timesheets 12.29.13-08.09.14." This document identified the recipient,,--,0 c::23I disregard that the claimant is not entitled to the benetit.See AS 47.05.210(a)(l). Lee is24 ) currently living in Oregon and this Investigator is unaware of any plan by Lee to return toAlaska.25! 6.26Ll':1':k signed timesheets as the recipient of services attesting to havingI27I received ;n .:xcess of 1,800 in PCA services that were never provic'r crnplamtIi, :' gc Xof'l)i J/t? III lamd! f,J/I) 1:11,mJ 1\mi.d /Ju.:k Lu:J. Alaska law

1 provides that a person commits medical assistance fraud by knowingly assisting another2person to prepare a claim for submission to a medical assistance agency for property,3services or a benefit with a reckless disregard that the claimant is not entitled to the4property, services or benefit. See AS 47.05.210(a)(2).5DATED at Anchorage, Alaska this I6aday of June, 2015.foJkU \ 78Investigator Lance AndersonOffice of Special ProsecutionsMedicaid Fraud Control Unit91011. . 12SUBSCRIBED AND SWORN TO before me this13Alaska.C-: (.14Q. 15OFFICIAL SE.ALstate of Alaska16AVIS P. MARBURYNOTARY PUBLIC17181920212223I24I!I2sI26127 ljII':' ,·ttlplamt!: '''" v. L'.uwl lfo //pm and O.JJ71.:1 ! ,Jck Lee1j 1 [J,g.t: 9of 9IIlo-;c, day of June 2015, at Anchorage,Notary Public in and for AI kaMy Commission Expires: End of Hire

PCA to provide home based healthcare services. The PCA fills out a timesheet for the work done and submits it to a PCA agency that in turn bills Medicaid. Medicaid pays approximately 2- an hour to the agency and the agency must pay the PCA at least half 3. On June 30, 2014, DHSS received information that several Medicaid

State of New York Office of the State Comptroller Travel .

DISTRICT COURT, CITY AND COUNTY OF DENVER, STATE OF