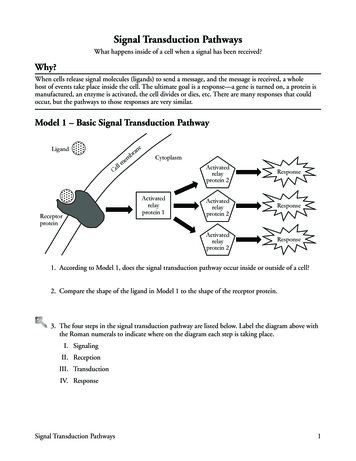 Signal Transduction PathwaysWhat happens inside of a cell when a signal has been received?Why?When cells release signal molecules (ligands) to send a message, and the message is received, a wholehost of events take place inside the cell. The ultimate goal is a response—a gene is turned on, a protein ismanufactured, an enzyme is activated, the cell divides or dies, etc. There are many responses that couldoccur, but the pathways to those responses are very similar.Model 1 – Basic Signal Transduction otein 1ReceptorproteinActivatedrelayprotein 2ResponseActivatedrelayprotein 2ResponseActivatedrelayprotein 2Response1. According to Model 1, does the signal transduction pathway occur inside or outside of a cell?2. Compare the shape of the ligand in Model 1 to the shape of the receptor protein.3. The four steps in the signal transduction pathway are listed below. Label the diagram above withthe Roman numerals to indicate where on the diagram each step is taking place.I. SignalingII. ReceptionIII. TransductionIV. ResponseSignal Transduction Pathways1

4. Based on the diagram in Model 1 and your labels, propose a definition for “transduction” in thecontext of the signal transduction pathway.5. Amplification often occurs during the transduction step in the signal transduction pathway.a. Define “amplification” as it is used in everyday language.b. Explain how the signal in Model 1 was amplified.6. List several possible responses that could occur due to a signal being received by a cell. (Hint:There are several listed in the Why? box.)7. Once the response is achieved in a cell, what would need to occur to stop the response?Read This!Signal transduction pathways are as varied as the species on Earth, but each of them follow the same basicsteps. Reception may occur by the ligand attaching to a receptor protein or the ligand may travel throughthe cell membrane by diffusion. Transduction may occur by one protein or by several proteins activatingeach other in a cascade. Keep this in mind as you continue working through this activity.2POGIL Activities for AP* Biology

12. What is the cell’s response to the signal received in Model 2?13. In Model 2, steps 3, 4, and 5 are shown as amplification steps. Describe what that means interms of this signal transduction pathway example.14. What advantage would there be to an organism if the signal transduction pathway had severalamplification steps?15. Describe what would occur in the cell if the activated protein kinase enzymes continued to beactive for a long period of time.16. What would need to occur in the cell to deactivate the protein kinase enzymes?17. Protein phosphatases are enzymes that remove phosphate groups from proteins. Complete theillustration in Model 2 by adding at least two protein phosphatases (PP) to show how the cell isreturned to inactive status.18. Although signal transduction pathways vary among species, there are several common elements.Explain how a biologist might use details about signal transduction pathways used in differentspecies as evidence for evolutionary relatedness.4POGIL Activities for AP* Biology

Read This!Relay molecules and secondary messengers have essentially the same jobs in signal transduction pathways.However, relay molecules are almost always proteins that require activation. They are large and do not diffuse through the cell quickly. Secondary messengers on the other hand are small, water soluble moleculesthat can diffuse quickly. They may or may not need activation before they are able to move the signal onto the next step in the process. Cyclic AMP (cAMP) and calcium ions (Ca2 ) are common secondary messengers in human systems.21. Within an organism it is critical that signals between cells are very specific. For example, ifligand A is meant to activate immune system cells to reproduce in response to an infection, itshould not also cause other cells to grow as if they had received a growth hormone. When aligand is released, what prevents all of the cells in the body from being affected?6POGIL Activities for AP* Biology