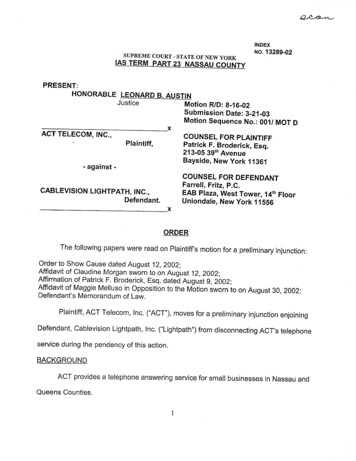 ACT TELECOM, INC. v. CABLEVISION LIGHTPATH, INC.Index No. 13289-02discontinuing its telephone service pending the final resolution of this action.Lightpath opposes the granting of a preliminary injunction asserting that theunpaid charges included not only the charges for the data circuit equipment but alsoregular telephone charges which are not in dispute. Lightpath further asserts thatpursuant to the provisions of Section 55.8 of the Intrastate Charges Tariff which havebeen approved by the New York State Public Service Commission that it is permitted toterminate a customer ’s telephone service upon IO days notice of non-payment.DISCUSSIONThe party seeking a preliminary injunction must demonstrate a likelihood ofsuccess on the merits, irreparable harm or injury will occur if the relief is not granted anda balancing of the equities favors the party seeking the preliminary injunction. AetnaIns. Co. v. Capasso, 75 N.Y.2d 860 (1990); and W.T. Grant Co. v. Sroqi, 52 N.Y. 2d 496(1981). See also, Town of East Hampton v. Buffa, 157 A.D. 2d 714 (2nd Dept.1990).Failure to establish all three prongs results in denial of the application for a preliminaryinjunction. See, Laro Maintenance Corp., v. Culkin, 255 A.D. 2d 560A.(2nd Dept.1998).Irreparable HarmACT has clearly demonstrated that it will suffer irreparable harm if Lightpathterminates or disconnects its telephone service. ACT is a telephone answering service.Its business is dependant upon uninterrupted telephone service. If ACT’s telephoneservice is shut down for even the briefest of time, ACT will be unable to service itsclients which will negatively affect its business. If ACT ’s telephone service is turned off3

ACT TELECOM, INC. v. CABLEVISION LIGHTPATH, INC.Index No. 13289-02for a prolonged period of time, it will be out of business.ACT has established that itwill suffer irreparable harm if Lightpath terminates ACT ’s telephone service.B.Balancinq of EquitiesACT has also established that the balancing of equities is in its favor.If ATC’stelephone service is terminated, it will be put out of business. Lightpath has failed toestablish that ACT either ordered or requested the data circuit equipment or agreed topay for this service. In addition, Lightpath can be adequately compensated if it issuccessful in this action by money damages. Therefore, the balancing of the equitiesfavors ACT.C.Likelihood of Success on the MeritsACT has established a likelihood of success on the merits regarding the unpaidcharges tor the data circuit equipment. ACT asserts that it did not order or request thisservice and that it has never used and does not need this service. The equipment wasunilaterally added to ACT ’s service and bill by Lightpath. Lightpath does not point toany provision of the September, 2001 agreement whereby ACT ordered or agreed topay for the data servicing equipment was to be installed on ACT ’s telephone lines.Lightpath also does not submit any agreement or evidence demonstrating that ACTagreed to pay for the data servicing equipment. Therefore, ACT has established alikelihood of success on the merits on its claim to cancel this agreement and void thesecharges.

ACT TELECOM, INC. v. CABLEVISION LIGHTPATH, INC.Index No. 13289-02However, Lightpath alleges that ACT owes Lightpath money for the basictelephone service Lightpath was to provide pursuant to ACT. ACT does not dispute theterms of this agreement or that there is money due and owing to Lightpath pursuant tothis agreement.The commencement of this action does not place the telephone serviceagreement or the charges to be paid by ACT to Lightpath in connection with thisagreement in dispute or relieve ACT from its obligation to timely pay the charges forservice contemplated in the agreement.D.UndettakinqThe Court is required to direct the Plaintiff to post an undertaking to assure thatall damages incurred by the Defendant will be compensated if it is determined that thepreliminary injunction was improvidently granted. CPLR 6312(b). See also, Marqolis v.Encounter, Inc., 42 N.Y. 2d 475 (1977); and Carter v. Konstantatos, 156 A.D. 2d 632(2ndept. 1989).In this case, the amount required to be posted as an undertaking is unclear.Since the charges for the telephone charges are not in dispute, it is appropriate tocondition the issuance of the preliminary injunction upon ACT paying all back chargesfor telephone service and upon its remaining current on its telephone charges.However, this amount is not clear from the papers submitted to the Court. Therefore, ahearing should be held to determine the amount of the unpaid telephone chargesseparate and apart from the unpaid data servicing charges so that the appropriate5

ACT TELECOM, INC. v. CABLEVISION LIGHTPATH, INC.Index No. 13289-02payment and its method of payment by Plaintiff can be determined.In addition, to compensate Defendant for counsel fees and costs related to thedefense of this motion in the event that the preliminary injunction granted herein isimprovident, Plaintiff should post an undertaking in the sum of 2,500.00Therefore, it isORDERED, that Plaintiff’s motion for a preliminary injunction is granted to theextent that Defendant Lightpath is hereby enjoined and restrained fromdiscontinuing telephone service furnished to ACT; and it is further,ORDERED, that the preliminary injunction is conditioned upon ACT paying allback telephone charges and remaining current on all telephone charges incurred withLightpath; and it is further,ORDERED, that Plaintiff shall also post an undertaking in the sum of 2,500.00by placing such sum in an interest bearing escrow account with his attorney, depositingsucn sum with the Nassau County Treasurer or post an undertaking with a New Yorksatisfactory to the Court within ten (10) days of service of a copy of this Orderwith notice of entry; and it is further,ORDERED, that the matter is set down for a hearing before the undersigned onJune 13, 2003 at 9:30a.m. for the purposes of determining the unpaid telephonecharges separate and apart from the unpaid data servicing equipment charges in orderto determine the appropriate amount to be paid by Plaintiff and the method of itspayment; and it is further6

ACT TELECOM, INC. v. CABLEVISION LIGHTPATH, INC.Index No. 13289-02ORDERED, that this matter is set down for a Preliminary Conference upon theconclusion of the June 13, 2003 hearing.This constitutes the decision and OrderDated: Mineola, NYMay 21,2003MAY 2 3 2003

ORDER OF THE SUPREME COURT OF TEXAS STATE BAR RULES

A-517 BEFORE THE HON BLE SUPREME COURT OF INDIA - Lawctopus